Too Blessed to Be Depressed...

I started attending 1st Bikers Church of Texarkana in 2007, when there was a little over 25 people attending, holding service in Brother Gary's garage, where they had been since 2000. I owned a bar at the time, and I was helping a "girl of the streets" try to straighten her life out. (Still praying for her...) She is the one who introduced me to the church. If they could convince HER to attend, what WAS this church about? I wanted to see for myself.

I have never experienced such Agape Love as I have experienced from the moment I walked in. I FELT the Spirit of God there the whole service! I wanted more, so I attended again....and again.

In 2008, I found myself homeless, but the church (1st Bikers Church) continued to teach and strengthen my resolve, they held me up with their love and their prayers. They supported me spiritually and encouraged me. They were my family.

Finally, Brother Gary said, "Shonda, when are you going to join our church and be a member?" Without hesitation, I said,

I watched and experienced the joy and happiness and tears and pain and heartbreak all of our members experienced when Brother Paul (My Boss is a Jewish Carpenter) joined our church and became an associate pastor, and Brother Matthew preached his first sermon (that was funny...) and went from being lead guitarist to ordained associate pastor. Me and my son who was visiting got to witness his ordination. A couple of years later, Brother Gary baptized my son.

Then the church became an official church and we grew so much that Brother Gary couldn't get us all into his garage. So we found the church we are in now.

It was a remnant of Hurricane Katrina. The old church had been gutted and junked out so bad that there were some who said it wasn't worth it. But, Joshua and Caleb's spirit prevailed in our church, and we decided to chance it. Brother Paul, a carpenter by trade, set himself to work.

During this time, we painted, threw out junk, tore down walls, and prayed. As we started rebuilding and restoring the beauty of the old church, Brother Trask, our air conditioner guy was up in the rafters putting our air system together and had a heart attack and died. This was a few short months after his conversion, over which a few weeks later he had said, "Someone oughtta put a warning label on this Christianity thing!"

Just a month later, Brother Paul when outside to test the water lines and was hit by a drunk driver and killed.

Satan was trying so hard to stop our work. We cried. We wailed, We prayed. We loved and we held each other up. We were family.

And, we didn't stop.

For the last few years God has blessed us. Even though I wasn't able to attend for about two years like I wanted, my church family was still VERY important and close to my heart. When I finally started attending again, it was like coming home to my family.

Now, Brother Gary has moved on, and Matthew C. Butler has been our Pastor for seven years. Brother Danny has just been taken from us as an AWESOME Associate Pastor. And, this experience is still ongoing. But, the love, the joy, the tears we share gives a testimony that should make all other churches jealous. I love my church family dearly.

Today, we are praying God's will for a bigger Church Building. Our church is once again busting at the seams.

I wouldn't trade them for the World. (and I mean that literally!) 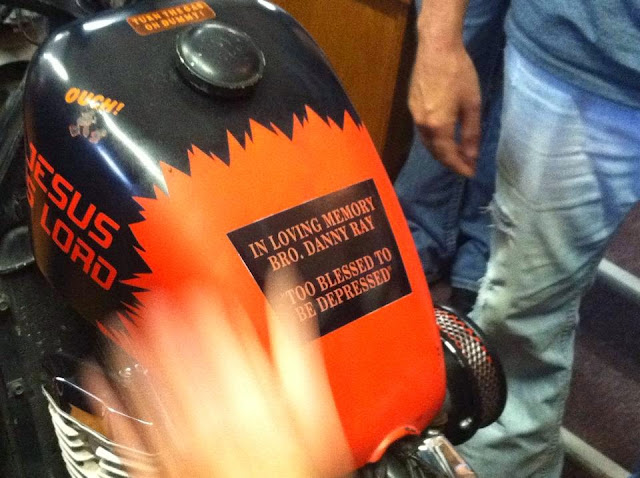 Posted by Shonda Ponder at 9:00 PM