Out of the Presence of God and Smack Dab Into His Grace... 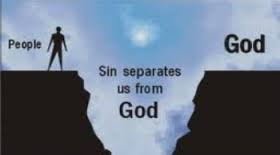 Genesis 4
13 And Cain said unto the LORD, My punishment is greater than I can bear.
14 Behold, thou hast driven me out this day from the face of the earth; and from thy face shall I be hid; and I shall be a fugitive and a vagabond in the earth; and it shall come to pass, that every one that findeth me shall slay me.

Cain had murdered his brother, Abel. He had done the unthinkable. God could not abide such insolence and destruction and disrespect in His presence. He banished Cain.

His sin was another step away from the garden that God had created for His children. It's as if Adam's sin had started a chain reaction that was working it's way toward a big climactic event. God could not let this rebellion stand. He had to follow through with the consequences in order to teach those who would come later that disobedience comes with a price that you don't want to pay.

God could have struck Cain down with lightening, or flicked a finger and "poof" Cain would have been gone. But, even in His anger and hurt, He had mercy enough to let Cain live out his life on this earth. God had a plan, and Cain was a part of it.

And, indeed, without Cain, the lesson would have been lost.

Romans 3:23
“For all have sinned, and come short of the glory of God;”

And, God has mercy with us, giving us time to come to Him for forgiveness.

God has given us a choice. He has shown us that the consequences will be enacted.

Deuteronomy 30:19
“I call heaven and earth to record this day against you, that I have set before you life and death, blessing and cursing: therefore choose life, that both thou and thy seed may live:”

Psalms 49
7 None of them can by any means redeem his brother, nor give to God a ransom for him:
8 (For the redemption of their soul is precious, and it ceaseth for ever:)
9 That he should still live for ever, and not see corruption.

There was no man on earth worthy of eternal life with God, who cannot abide sin in His presence.

Romans 3:23
“For all have sinned, and come short of the glory of God;”

God wanted Cain (all of us) to have the chance to live. He wanted to give Cain (All of us) the gift He had intended for Adam to have.

Romans 5
8 But God commendeth his love toward us, in that, while we were yet sinners, Christ died for us.
9 Much more then, being now justified by his blood, we shall be saved from wrath through him.
10 For if, when we were enemies, we were reconciled to God by the death of his Son, much more, being reconciled, we shall be saved by his life.
11 And not only so, but we also joy in God through our Lord Jesus Christ, by whom we have now received the atonement.