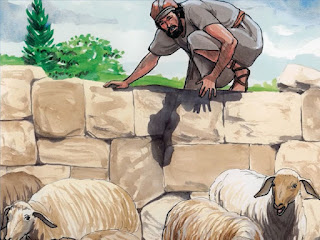 1 If a man shall steal an ox, or a sheep, and kill it, or sell it; he shall restore five oxen for an ox, and four sheep for a sheep.
2 If a thief be found breaking up, and be smitten that he die, there shall no blood be shed for him.
3 If the sun be risen upon him, there shall be blood shed for him; for he should make full restitution; if he have nothing, then he shall be sold for his theft.
4 If the theft be certainly found in his hand alive, whether it be ox, or ass, or sheep; he shall restore double.

Oxen are beasts of burden, or work animals. They have a myriad of uses for mankind, from ploughing fields to pulling carts and treading meal. Sheep are used for making coverings and clothings, for warmth and body protection. Both animals were used in sacrifice and meals. Oxen are worth more, in God's eyes, therefore God wants thieves to pay more for stealing them.

If a thief is in the process of stealing and someone kills him, then the man who kills a thief is not subject to the law of life for life. He was protecting his property and livelihood. But, if the thief is only injured, then the thief shall pay full restitution, and if he can't, he is sold into servanthood for his theft. He's going to work it off, and then some.

And, if a thief is caught in the act with a live animal, then he should pay double for whatever was in his hand at the time.