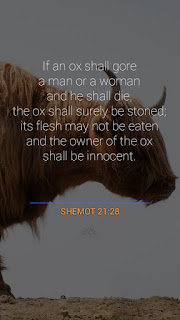 28 If an ox gore a man or a woman, that they die: then the ox shall be surely stoned, and his flesh shall not be eaten; but the owner of the ox shall be quit.
29 But if the ox were wont to push with his horn in time past, and it hath been testified to his owner, and he hath not kept him in, but that he hath killed a man or a woman; the ox shall be stoned, and his owner also shall be put to death.
30 If there be laid on him a sum of money, then he shall give for the ransom of his life whatsoever is laid upon him.
31 Whether he have gored a son, or have gored a daughter, according to this judgment shall it be done unto him.
32 If the ox shall push a manservant or a maidservant; he shall give unto their master thirty shekels of silver, and the ox shall be stoned.
33 And if a man shall open a pit, or if a man shall dig a pit, and not cover it, and an ox or an ass fall therein;
34 The owner of the pit shall make it good, and give money unto the owner of them; and the dead beast shall be his.
35 And if one man's ox hurt another's, that he die; then they shall sell the live ox, and divide the money of it; and the dead ox also they shall divide.
36 Or if it be known that the ox hath used to push in time past, and his owner hath not kept him in; he shall surely pay ox for ox; and the dead shall be his own.

Everyone has heard stories of animals attacking people. In these verses, you can substitute the word "ox" for any animal a human being owns. Just because it was a horse or a pitt bull dog and not an ox doesn't make the punishment any different.

So, to put this in perspective: If your pitt bull dog attacks a little girl and kills her, then the dog should be stoned to death (or shot).

If the dog has a history of attacking people in the past and the owner ignored it, then the dog should be shot and the owner should also receive the death sentence. If the owner is given mercy for his own life, and is asked to pay a settlement, then whatever they decide he should pay (it doesn't matter the amount) then he should pay it.

There is no limit as to how much a human life is worth.

But, if a man sets a trap or digs a hole and an animal that belongs to someone else falls into it by accident, the man who set the trap or dug the hole has to pay whatever the animal's market value is and then he owns the dead animal -- to bury it, eat it, or any other purpose.

Posted by Shonda Ponder at 7:37 AM