God's Laws: When people injure each other 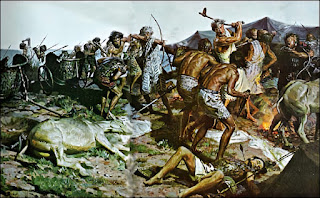 18 And if men strive together, and one smite another with a stone, or with his fist, and he die not, but keepeth his bed:
19 If he rise again, and walk abroad upon his staff, then shall he that smote him be quit: only he shall pay for the loss of his time, and shall cause him to be thoroughly healed.
20 And if a man smite his servant, or his maid, with a rod, and he die under his hand; he shall be surely punished.
21 Notwithstanding, if he continue a day or two, he shall not be punished: for he is his money.

God doesn't like it when His people fight one another, and it doesn't matter who was right or wrong, there are consequences!

If two men are fighting, and one beats the other one so bad that he has to be hospitalized, and if the man who is hospitalized doesn't die, the man who beat him has to pay the hospital bills and for his loss of wages that he incurred during the time it took for him to heal.

Posted by Shonda Ponder at 8:23 AM