Living by the Sword 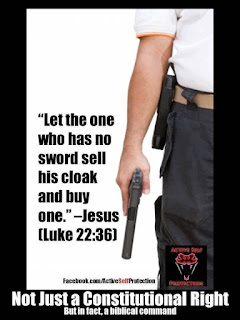 Luke 22
35 And he said unto them, When I sent you without purse, and scrip, and shoes, lacked ye any thing? And they said, Nothing.
36 Then said he unto them, But now, he that hath a purse, let him take it, and likewise his scrip: and he that hath no sword, let him sell his garment, and buy one.
37 For I say unto you, that this that is written must yet be accomplished in me, And he was reckoned among the transgressors: for the things concerning me have an end.
38 And they said, Lord, behold, here are two swords. And he said unto them, It is enough.

Jesus knew that the day was going to come that his disciples were going to have to defend themselves. He preached peace, and turning the other cheek, and having enough love to die for your friends. He never intended that a sword would be used to murder someone with it, or intimidate people around them, but to defend themselves from attackers.

A war was coming. No man goes to war without a weapon.

Jesus said, (Matthew 10:28) "And fear not them which kill the body, but are not able to kill the soul: but rather fear him which is able to destroy both soul and body in hell."

Jesus also warned in Matthew 26:52 Then said Jesus unto him, Put up again thy sword into his place: for all they that take the sword shall perish with the sword.

This did not mean you should not have a sword to defend yourself with. This was referring to Peter who drew his sword first without waiting for the Lord to act. Making assumptions while wielding a weapon is dangerous. Just because someone has a sword doesn't mean he's going to pull it on you. The Sword should never be carried for offensive purposes.