God does what He promises He will do! 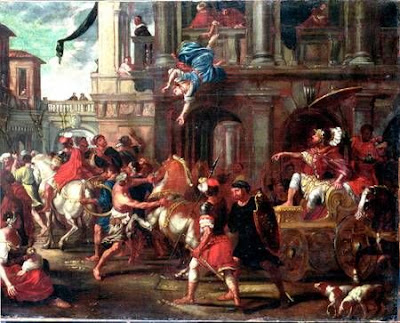 Elisha called one of the other prophets under him, and he said, "Take this box of oil to Ramoth-Gilead, and annoint Jehu, the son of Jehoshaphat, as king. Then run away as fast as you can."

So, he did as he was told. When he got there, the Captains of the host of Jehoshaphat's army were sitting outside. He said, "Captain, I have to do something for you."

The prophet said, "For you." He took him into the house and he told him, "God says, 'I have annointed you as king over my people. You shall rid Israel of the House of Ahab and avenge the blood of the prophets that were killed at the hand of Jezebel; and you will leave none of them, and Jezebel will be eaten by the dogs and no one will bury her." Then he ran.

When Jehu came out of the house, the other Captains said, "What was that all about? That man was crazy! What did he say to you?"

Jehu just shrugged and said, "Like you said, he's crazy." Then he told him what the prophet said. They all stood up and put on their garments and blew the trumpet and announced him King over Israel. And Jehu began to conspire against Joram.

Joram had gone to heal his wounds from the Syrians in Jezreel. So Jehu went to see him. Ahaziah, the king of Judah was also there to see Joram. A watchman saw Jehu coming in his chariot driving furiously and told Joram, who sent out a messenger asking, "Do you come in peace?"

Jehu told him, "What do you know about peace?" and kept driving. So they sent another, who got the same answer.

So Joram and Ahaziah went out to meet Jehu on the way and Joram said, "Do you come in peace, Jehu?" And Jehu answered and said, "As long as your mother continues to reak havoc on Israel, there is no peace!" Joram turned and fled away, yelling for Ahaziah to run. "It is treachery, Ahaziah!" he yelled. Jehu grabbed a bow and shot him between the shoulders.

Jehu told them to cast Joram in the field of Naboth. Then as Ahaziah was running away, they shot him, too. He went to Megiddo, where he died.

Jezebel heard of what happened and she painted her face. When Jehu got to Jezreel, she asked, "Did you have peace in your heart when you came to Joram?" as she leaned out of an upstair window. Jehu yelled to the servants in the house, "Who is on my side? Anybody?" Three Eunuchs came out and he said, "Throw her down!" So they went upstairs and threw Jezebel out the window. Then he ran over her with his horse and went into the house to eat.

When he had done eating, he told them, "You know, she was a king's daughter and we ought to bury her properly. Go get her." So they went out to get her, but the dogs had eaten all but her skull, the palms of her hands and her feet.

Jehu knew that it was the Lord, for he had been told by the prophet this would happen.

===========
When God annoints you to do something, it is what you should consistently work toward until it is finished. If you do, all that God promises for you will happen.