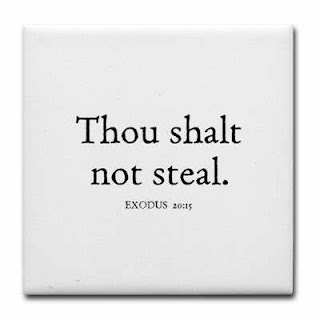 When I was about three years old, I was attending a family reunion at a place that had a swimming pool.

The family gathering was upstairs. The building was made nearly all of glass.

The swimming area had a store in it where anyone could buy snack foods.

The attendent, who was not seen nearby, went and told our parents what we had done.

My mother spanked me right there in front of everyone and made it perfectly clear that stealing would not be tolerated.

I was ashamed. I didn't know I was stealing. I was three years old. And, I was forced to apologize to the attendent in front of everyone and give back the candy, which, thankfully, I hadn't eaten yet. It was a lesson I learned well.

But, more than that, Romans 6:23 says, "The wages of sin is death". When we sin, we are committing a slow painful suicide. The good news is that Jesus addressed this in John 10:10 when He said, “The thief cometh not, but for to steal, and to kill, and to destroy: I am come that they might have life, and that they might have it more abundantly.”

So, if you are a thief, there is hope. Turn to Jesus as Lord of your life and, as Jesus told the prostitute, "Go and sin no more".

Posted by Shonda Ponder at 7:27 PM