When People Won't Listen to You 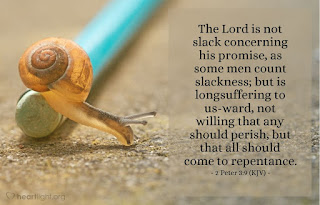 This week, I have been focusing on Exodus Chapters 5-9 in my daily bible readings.

The people were ready to have hope for something, ANYTHING, that would take them out of the bondage that they were in.

After Moses had spoken to the people, the heads of all the houses of Israel went with him to show support as he faced the Pharoah with their petition.

The Pharoah just laughed at them and was angry because the work, which the Israelites did, were stalled to make time for this. He told them to stop wasting their time, and since they had so much time on their hands, he made their work harder for them. He expected them to gather their own tools to do the job they were required to do, and he expected them to meet their quota the same as before.

After a while, the Israelites hated Moses. They blamed him for the fact they were now working twice as hard, and nothing seemed to be done about their plight.

This sounds so similiar to the political atmosphere here in the U.S. today. Anyone who speaks up against the powers that be are demonized and blamed, and their tools are taken from them so that they have to find new methods of survival, communication and ways to get ahead and be heard. And, they either stand beside or blame the one person that was in a place to help them, rather than the cause of the problem, which they had become used to and were familiar with.

So, Moses cried out to God. He asked Him why He had sent him, seeing that the people of Israel, whom he had come for, now hated him for doing what God had told him to do! God assured him that everything was going according to plan, and that he should keep moving forward.

God was about to show out in a mighty way!

He sent all of the plagues to Egypt, one by one. Each plague was worse than the one before it. It came in waves. And, yet, the Pharoah still hardened his heart and refused to let the people go. If he did that, who would do the work? If he did that, who would pay the taxes? Who would feed his people, who knew not how to do anything for themselves, and were too proud to get their hands dirty!

When God sent all the plagues, not one of Israel's property was destroyed. The people of Israel thrived, while the people of Egypt suffered, and yet the Pharoah still hardened his heart.

Sometimes, you can prove that things will work for the better for those who serve the Lord, but even as the proof is there in front of someone, they still will refuse to believe in what can better their lives.

The old addage, "You can lead a horse to water, but you can't make him drink" was so true for Moses. What was he to do?

There was only one thing left to do. It was the last resort. It was so terrible and horrible that God saved it for last, because He wanted to give every opportunity for someone to turn their hearts right before He took this action.

A revolution was about to take place.

So, when people don't listen to you, when people spit in your face and persecute you for doing what God would find pleasing, and when it seems that even your own people have turned against you because of your faith, understand this: God is working in their lives to bring plagues upon them. Their lives are being made difficult so that they will be forced to repent.

Their reaction to this is to hate God all the more, and in so doing, they will take it out on you.

Do not lose heart. Do not give up. Love them in spite of the pain. Keep moving forward, so they may see what God has in store for those who obey. Keep inviting them to join you on your journey of obedience.

2 Peter 3:9
“The Lord is not slack concerning his promise, as some men count slackness; but is longsuffering to us-ward, not willing that any should perish, but that all should come to repentance.”

There will come a day when that one last horrible plague will come, and after that, it will be too late.