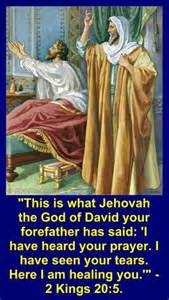 'In those days Hezekiah became ill and was at the point of death. The prophet Isaiah son of Amoz went to him and said, "This is what the Lord says: Put your house in order, because you are going to die; you will not recover."' (2 Kings 20:1)

Hezekiah had been given a death sentence. He had just been given what is the equivalent of the message from the doctor who says, "I am sorry. This particular type of cancer you have cannot be cured. The expected life expectancy of your stage is six to nine months." Those are the words he had heard from the prophet Isaiah. "The sickness you have has no cure. You will not recover." We heard the same message from my bride's oncologist. According to him we could expect another six to nine months for her to live. According to the prophet, Hezekiah may have had only a few more days. The Scripture does not tell us how soon Hezekiah would die.

Hezekiah was faced with two paths he could follow. Since God said "you are going to die and not live" Hezekiah could have taken the path which is so easy for any of us to take. Regret, disappointment, sorrow over his life to be now cut short.

My bride and I were faced with two paths we could follow. Since the doctor had told us that there was no cure for her disease, we could feel the same emotions. She would not see the grandkids grown and married and starting families of their own. She would never see her great grandkids. We would not enjoy our Christmases and other family holidays together. We would not be able to do any of the things we had long enjoyed doing together. Instead, we would care for her as her health slowly failed and finally, I would have to think about making funeral plans.


My bride and I likewise refused to accept the prognosis the doctor had given her. We "turned our faces to the wall" so to speak, and we prayed to the Lord.

God turned the prophet around and told him to go back to Hezekiah and tell him "I have heard your prayer and seen your tears; I will heal you." Hezekiah was healed and God added fifteen more years to his life.

God spoke to us through His Word and the Holy Spirit speaking to us when we prayed and we praised Him and told us, "Sandy will be healed. She will not die." Now we are beyond the time frame the doctor had given us and she is doing well. Well on the path to full restoration of her health. She's not finished with her treatments now but her health is good and she is feeling no effects of the cancer.

This applies to any sickness, any disease, any bondage you have in your life. You can accept it and claim it for your own. You can keep it and "live with it" and even celebrate it. Talking about it and dwelling on it and accepting that it is something you have and you will live with. Or die with. We did not. We did not claim this cancer as being a possession of hers. We did not say "she has cancer". Yes, there was a cancer in her body working against her best interest, but in no way were we going to claim it as her possession. It was an alien condition. One not natural to her body and one certainly not welcome. If it is unwelcome, it is not free to remain where it is. It had to go.

Again, this attitude applies to anything which is going wrong in your life. Don't accept it. Don't consider it the normal for you. It is not. It is contrary to God's will for you and you can get it out of your life. Pray to God for deliverance and for healing. Read the Scriptures on faith, prayer and believing. Read the testimonies of those healed and delivered by Jesus during His earthly ministry. Decide that it is going to be gone out of your life.

Now acknowledge that God is the healer and God is the deliverer. You cannot do it on your own. Don't even try. Let Him do it but trust that He is going to do it. Not just a trust which is a "I hope He will heal me" or "I hope that He will deliver me." Trust Him because His Word is true and fully faithful. What He said He will do, He will do.

Then reject its hold on your life. I am not talking about "just make positive thoughts." Positive thoughts do nothing. Trust in God does everything. We are not "wishing away" a disease or a bondage. We are knowing that God will act on behalf of those who trust Him.
Now start thanking Him. What? Thank Him before I have had my healing? No. Thank Him because you have your healing. Maybe you have not seeing it yet. Just because you have not see it yet, does not mean you have not received it yet. It will manifest itself. It may be instantly or it may come in steps. After all, remember what the definition of faith is? "The evidence of things not seen." Not YET seen. That means they are fact even until we see them. But, on the matter and subject of faith? That's a whole study of its own.