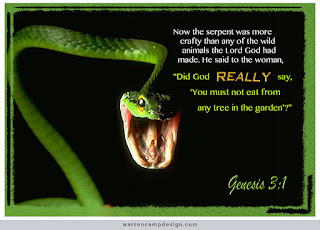 Genesis 3:1
“Now the serpent was more subtil than any beast of the field which the LORD God had made. And he said unto the woman, Yea, hath God said, Ye shall not eat of every tree of the garden?”

You see it on Facebook all the time: someone will post about how wonderful Jesus is and then someone else will make a comment such as, "Is he REALLY the son of God?" or, "Do you really believe someone could just get up out of a grave and walk out?"

They make you question your own train of thought. They cause you to rationalize, to defend yourself with the same logic that they are trying to use on you...and it never works.

Satan tempted Eve with her intellect. He made her question...not only what God had told her, but who she was. Soon, he would attempt even to make her question the very existence of the God that created her if he had to go that far.

Sometimes our doubts lead to big mistakes. Those mistakes make us kick ourselves, asking things like, "Why did I do that?" and "I shouldn't have listened". Nearly always, those mistakes find us on our knees asking for forgiveness from the one who "told us so" to begin with.

Believe. The best course of action when encountered by these negative people who work on Satan's behalf is to not engage. Walk away. Don't argue with them. Just continue to believe and trust that God is, was, and always will be, and that one day, even THEY will bow down to Him.

Email ThisBlogThis!Share to TwitterShare to FacebookShare to Pinterest
Labels: doubt